When my foster dog arrived he was suffering from severe allergies.  The poor guy was scratching to the point of causing damage to his skin.  The twice daily Apoquel and Benadryl relieved his symptoms some days.  But other days he was frantic from the discomfort.  At those times I would apply towels soaked in green tea and apple cider vinegar.

Colby’s diet prior to coming into the rescue was a dry food that advertised “beef as the first ingredient.”  This was a true fact.  But…ingredients in pet food are listed by weight.  Meat can be 70% moisture which affects the weight and a small amount can bring it to the top of the list.  With Colby’s previous diet he was actually eating a corn-based food.

When Colby arrived at my house I switched him to a homemade raw diet and made an appointment with Dr. Krisi Erwin of Wholistic Paws Veterinary Services in Ashburn, Virginia for an evaluation.  Dr. Erwin provided an herbal supplement and recommended the addition of barley to his diet for it’s cooling characteristic. 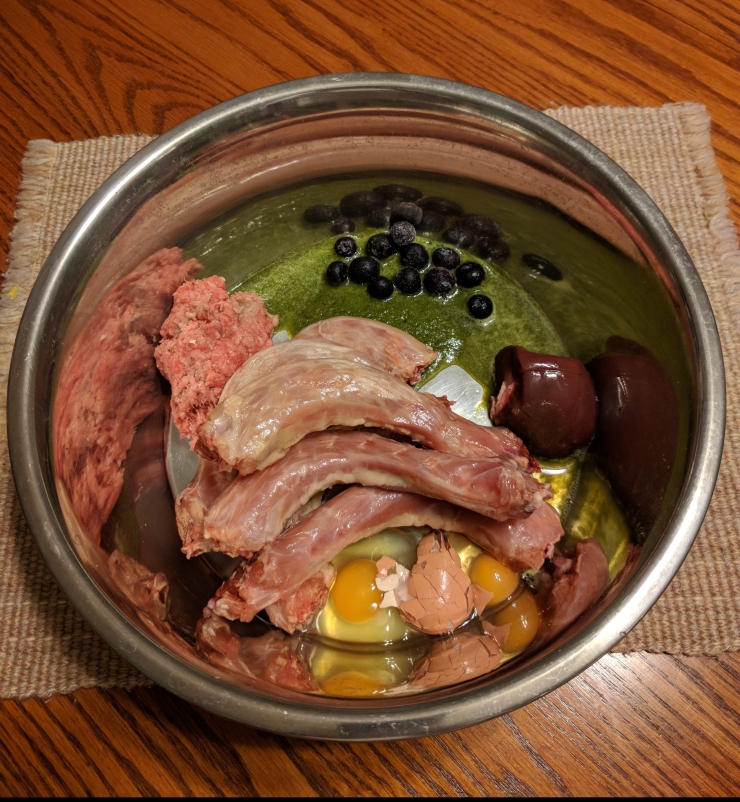 As a general rule you can expect healing from a poor diet to take one month for each year your pet was eating inferior food.  Six year old Colby has been with me for 5 months.  His progress has been gradual and he is now symptom free without any anti-itch medication.  Some days he has a grain-free meal like the one pictured above.  Other days, when I don’t feed raw meaty bones, I add meat and vegetables to Sojos  – a premix that is available at Instinctive Pet.  And some days he receives a whole chicken carcass or whole rabbit as his only meal.

Colby is now a happy and healthy boy who anticipates his meals with the cutest little front-foot tap dance.  It’s a joy to see his transformation.